In Memory of
Carol
Willner
1942 - 2022
Click above to light a memorial candle.
This Book of Memories memorial website allows family and friends a place to re-visit, share and enhance this tribute for future generations.
Open Full Navigation
Close
Menu 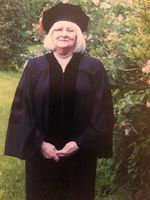 Carol Willner, born May 10th 1942, died of Parkinson's related complications on July 16th 2022, at the Jewish Home in Rockleigh NJ where she resided for the last 1.5 years.
While the last 6 years of her life were incredibly hard as she fought an uphill battle against this terrible and debilitating disease, prior to that she had nary an ailment to her name. She would say, in disbelief at how disabled she was becoming, "I never got anything that didn't go away". Those many preceding years of good health were put to incredible use though and her life was the embodiment of "You're never too old to..." and "try anything once". Well.. marriage was an exception. She did that twice but who's counting?

Carol had a penchant for reading the dictionary as a child and grew into the woman who has never forgotten a thing. With an incredible mind very unlike a siv, she could bust out any camp or Irish song she ever learned, continued to solve crossword puzzles and beat everyone at scrabble as recently as a few months ago. On the wall of her home in Sussex, NJ was a framed diagram of the longest sentence ever written, from Marcel Proust's "Cities of the Plain". She identified multiple errors but found it a most impressive display of wordsmanship, syntax and grammar none the less. In her bookshelf lived a plethora of classics, historical fiction, biographies and works by avante garde writers and poets (Ezra Pound, among others) and more comedic reads like the family favorite "Growing Up Catholic". That is to say she loved the art of language, developed a wicked wit and never lost her insatiable appetite for knowledge, witness her dual-ling careers in education and the law.

A Welder, a Baker a Super Fun Maker

Carol had numerous and varied interests (beyond the dictionary) including welding, sharing her considerable cooking talents (a byproduct of being a "frustrated chemist" she would say) and flying (as in piloting aircrafts). Hosting was as much a past-time for her as any other and she paired her interests and interesting people often. Her airshow parties and living room jazz jams (way ahead of the house concert trend) were infamous. She loved a good Chinese New Year's gathering (any excuse to make Peking Duck) and even during the intense years of study at Rutgers Law School, you could find class-mates (30ish years her junior) milling about her place any given weekend, debating the tenets of law and exploring morality in a manner resembling more the salons of the 1800s, than a "study group" trying to pass an exam (though they all did).

Carol was a natural giver, full of compassion and empathy. She spent much of her life in education, first as a special education teacher and then as a learning consultant helping kids with learning disabilities get the assistance and accomodations needed to be successful in school. After obtaining her law degree at 62, she devoted herself to the defense of parents who had their children taken away by the state. In her personal life she volunteered at the Special Olympics; gave up many a Thanksgiving to help cook and deliver food to the needy; offered her couch and spare room to anyone who needed it; and, became an honorary aunt/sister/grandma to many. What little money she acquired was either given away to others fallen on hard times or spent on things like Christmas gifts she couldn't afford but couldn't resist, for the joy and smiles they would bring. Oh she wasn't a Saint of course but she was undeniably a human in pursuit of doing good in the
world.

Carol leaves behind two daughters, Alice BrightSky and Stella Salmen, one son-in-law Matthew BrightSky, 2 grandsons Calen and Jonah BrightSky and countless friends and extended family
who will cherish her memory and the good times they shared. She is preceded in death by her three siblings: Cathy Kauffman, Tom Pendergast and John Pendergast and her “like a sister” cousin Patricia Costello. She loved them all so dearly, sang their praises often and jumped at any opportunity to be in their company. We have reason to believe there's an eternal reunion going on somewhere up there in that great after-hours bar in the sky, hopefully with a good stout on tap.

While she never relished the idea of being a grandma ("You can wave them out the window as you drive by" she would say) ... the role suited her quite well. Her adoration of her two grandsons was beyond reproach. She watched with great pride, their budding intellects and personalities, seeing more than a bit of herself in them. They knew exactly who to go to for questions on just about any topic including how to "land a greaser" or perform a "hammerhead" with their Dusty Crophopper planes. Name another Nana who can teach that…